Bump it With a Trumpet 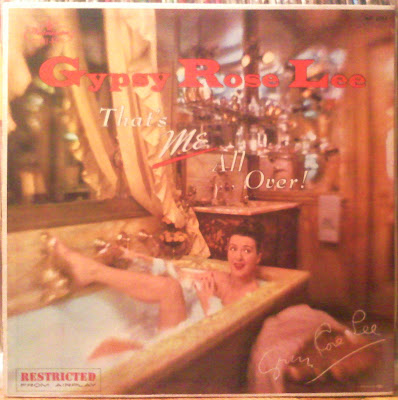 Every collector has a "Holy Grail" and Thats Me All Over is something I have had my eye out for since I saw it on the wall at Bleeker St. Records for $75.00.  Way out of my price range,  nonetheless I have kept mine, and several other people's eyes peeled for this amazing, wonderful, awesome looking LP.  So scoring this beauty on good old ebay for $6.99 plus shipping was, to say the least, a great drunk buy (yes I end up on ebay a lot after a few drinks.)  In fact when  woke up I was sure I had dreamed the whole thing.


I thought the song I Haven't a Thing to Wear was a great example of Gypsy Rose Lee's style...plus I think the album art was based off this diddy. I wish I had enough leisure time to take calls in the tub, or just a tub.
I love this kind of album because it has preserved a time that has long since passed, a romantic period in history where being a stripper was a high prestige job that paid amazingly well.  In her memoir she talks about her house on East 63rd Street in Manhattan "It has 26 rooms, a marble floor in the drawing room, a pool in the patio, an elevator and 7 baths scattered about".  Not bad for a lady who took her clothes off for a living.

But stripping in Gypsy Rose Lee's time wasn't done on a pole to shitty rap music, it truly was an art form.  A strip tease (tease being the operative word) was just that, a hint with a little innuendo, a shake of the hips and viol la, curtain comes down.

No one got there tits out, or rubbed their pussy on someone else's lap.  It was all done with elaborate costumes, often with a clever spoke/sung song culminating in the exposing of a leg or by flashing the side of a boob.  Thank goodness the people at youtube have a video of Gypsy in the act of taking it all off so you can understand what I mean.


It was obviously a much more...how would you say, subdued art form.  The video is from side two Psychology of a Strip-Tease Dancer (if you look on the art from the back cover you will recognize the costume).  The record reflects the period to a tee right down to the warning in the bottom corner on the cover.

I can barely grasp the notion that someone would want to play this on the radio, whether they were allowed to or not, a thought that makes me think I was born in the wrong era.  In the other corner they have printed Gypsy's autograph almost like a tramp stamp of approval. 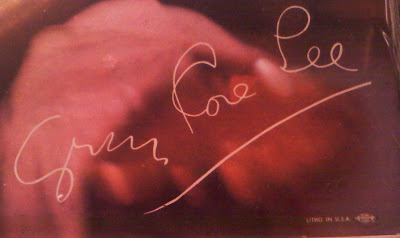 She sings Flings a song from the Broadway Musical A New Girl in Town which I did in college, not quite the beltastic number Nicole Floyd and Lauren Verfenstein sang out in on stage at Marymount Manhattan College but it was exactly what I expected from Gypsy.

She speaks the lyrics with a sly lilt in her voice like she is in on the joke, and the best part is she totally was.

As I said before I have been on the hunt for Thats Me All Over for years and I found it on Ebay for $6.99 (plus shipping) a literal steal.  Well it turns out February was not only Black History month, but it was also Gypsy Rose Lee month for me.  The same week I Found my "Holy Grail" I stumbled upon a second record that I didn't even know existed called An Evening With Gypsy Rose Lee.  Also on Ebay and also for only $6.99 (plus shipping). 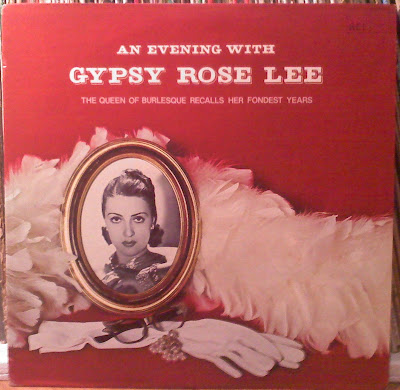 After some research I found this was originally released in 1962 as Gypsy Rose Lee Remembers Burlesque. Here Lee shares tales of life in the world of the strip teaser.

I am spellbound listening to this rich history.  So I decided to include the whole thing in 2 tracks.

I recommend drawing a hot bath, lay a towel soaked in rose water across your eyes, pour yourself a Gin Ricky and let Gypsy tell you about life in Burlesque. 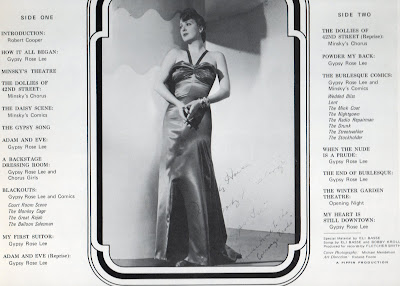 Here is another visual example of what made her so...Gypsy.  From the 1958 movie Screaming Mimi Gypsy performs Put the Blame on Mame.


Unless you live under a fucking rock (or you are a straight person)you know Gypsy Rose Lee's Life was turned into a musical aptly titled Gypsy.  I won't go into a whole history of Gypsy: A Musical Fable because if you don't know the show you should be fed to Chowsey, Mama Rose's Yorkie! I will say that the writers changed the focus of the story from Gypsy to her mother with thrilling effects.  I decided this post was already so out of control I would just go whole hog and share all of my vinyl Gypsy material at once.

I shall start with my Favorite Gypsy recording as well as my favorite Mama Rose, Angela Lansbury (I hope LuPone doesn't hunt me down and kill me).  No you aren't seeing double for whatever reason the producers decided to re-record some of Lansbury's tracks for the U.S Release of the album.  The one on the right with the red RCA is the American distributor, and the one on the right with the white RCA is the London distributor.  I won't lie I have listened to both and the only difference I could really find was at the end of Some People on the London release Angela takes the final note up (as it's written in the score), and it is amazing.  Here have a listen. 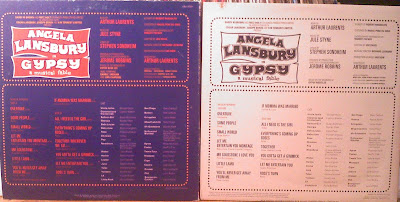 I also love the cover art from the 1962 movie starring Rosalind Russell and Natalie Wood, although I don't like the movie at all.  Both of the lead actresses are amazing in other films but here they were miscast and the pacing is dreadful.  There is no drive to any of the music in the film, no sound of urgency.  It all sounds kinda flat.  Like a fart you thought had promise of being explosive, but ends up being nothing more than a small toot. (And Karl Malden's nose should get under the title billing, seriously it's epic.) 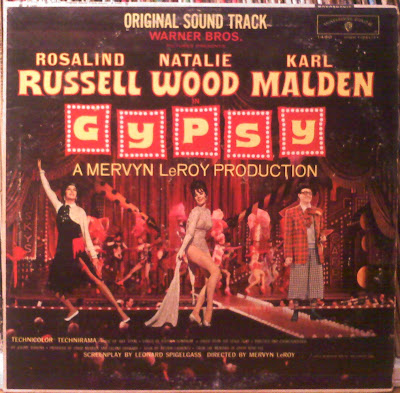 The Original Broadway Cast of Gypsy starring Ethel Merman. The workhorse who was notorious for her brassy belt, moody disposition, and inability to act, is electric on this recording. Her Rose's Turn makes me pee, and the way she sweetly belt's Small World is so touching in her Merman way. 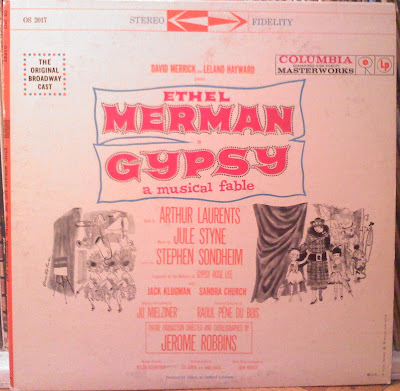 And then there's the Tyne Daly revival (with awful album art).  Not a singer, but a great actress.  Her Rose was very classic, and she did this crazy ball change at the end of Some People that was so vaudevillian, she might as well have yuck, yuck, yucked off the stage.  Anyone??  Rodemann??  You know.... 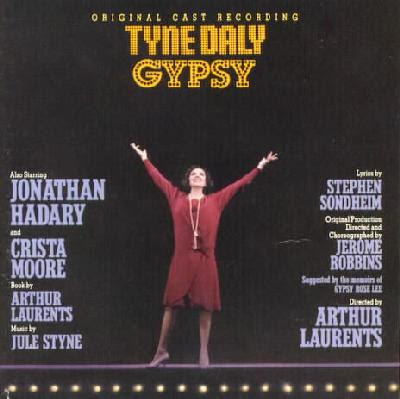 Annie Ross recorded a jazz version of the Gypsy score in 1959.  And I must say it is a wonderful departure from the usual brassiness of the Broadway sound.  The jazzed up Overture is a delight. 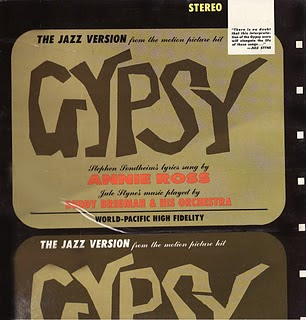 Here is another jazz version of Gypsy this time without vocals.  Presented by the Jack Sterling Quartet.

Being a fan of both showtunes and jazz this is a perfect combination.  Plus I want that fur... 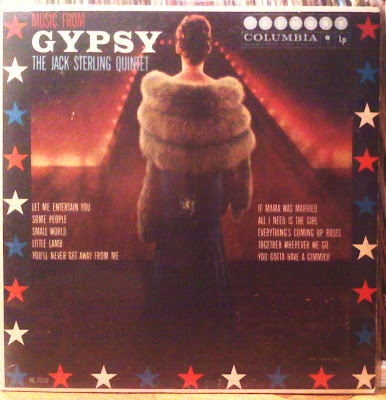 Sandra Church who played Gypsy in the Original Broadway Cast recorded an album of famous burlesque songs during her run in the famous Broadway musical.

Including an amped up version of Let Me Entertain You (Gypsy's anthem from the show) and Zip from Pal Joey, a song which begins with the singer talking about interviewing Miss Gypsy Rose Lee, and proceeding into a strip tease. 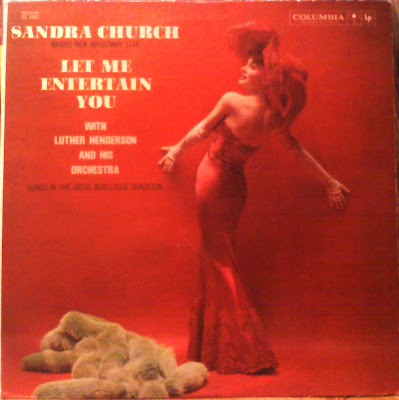 As you can see Gypsy Rose Lee inspired a great deal of amazing music.  An Author, a mother, a musician, and an avid stamp collector Gypsy Rose Lee was an icon.  Trying to describe what Gypsy was (a "high-class" stripper), H. L. Mencken coined the term ecdysiast.  Whatever you want to call her she brilliantly used humor, wit, and intellegance to transform a vulgar performance style into something special and wonderful.