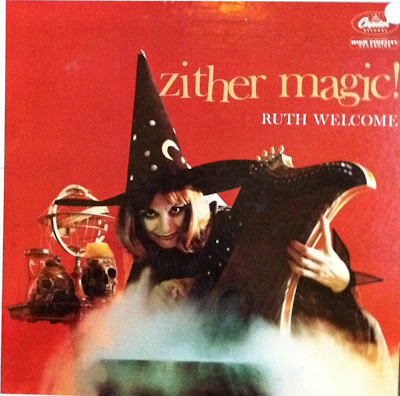 What the fuck is a Zither you may ask?  It's akin to the autoharp but has the resonance of a guitar, and above Ruther Welcome is dipping her zither into a caldron.  This album has nothing to do with witches, or Halloween, or magic in a Harry Potter sense of the word magic.  Instead this is magical like a beautiful sunset, or a good bowel movement.  That is the kind of magic Ruth's Zither creates. 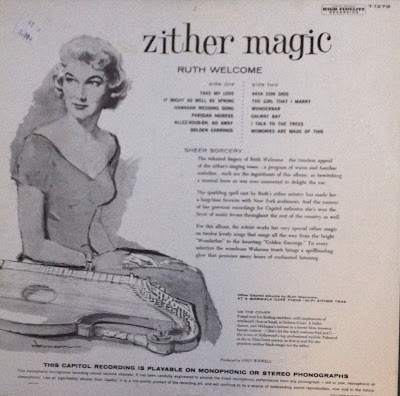 I am surprised by how much I enjoy the Zither, it has the retro sound that could end up as background music in a Quentin Tarantino Movie.  I could see Daryl Hannah or Pam Grier walking in slow motion while doing something cool and sexy like flipping their hair while loading a gun.

Check out her Zither....

Just yesterday i stumbled across 4 more of Ruth Welcome's Zither albums at Salvation army while Tirtzah and Tanner and I braved the possibility of bed bugs looking for Halloween costumes.  So we won't be left wanting an album full of zither.
Posted by Vinyl Whores at 12:26 PM 0 comments 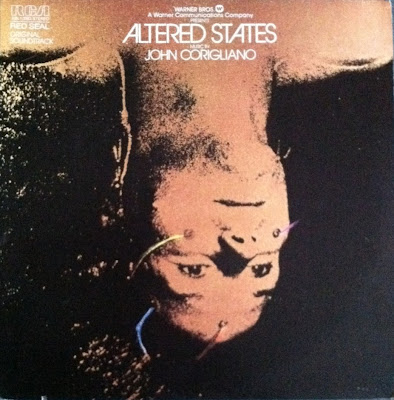 I've never actually seen Altered States (I know it's been added to my netflix que).  But I think this counts as a horror movie soundtrack (had I thought ahead I wouldn't have done The Shining Soundtrack blog when I did, I'd have saved it for Halloween but please feel free to check it out.)  As I said I haven't seen the movie but I did sit down this week and listen to the score for Altered States and I have to say it makes me wish I had seen it.  The music definitely sets the mood for something creepy and strange.

The music is written by John Corigliano who was mostly a classical composer but did a few film scores.

True horror scores stand on their own and are able to strike fear with out the moving image. And this score nails the mood.  So based on the music alone I guess I should have seen this damn movie.
Posted by Vinyl Whores at 1:17 PM 0 comments 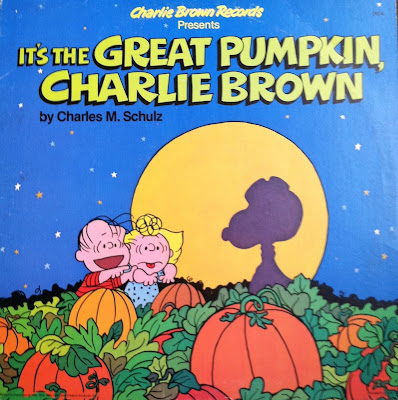 There is something about the Peanuts cartoons that captures the spirit of holiday's so well.  Whether it be Christmas, Thanksgiving, or in this case Halloween.  Unfortunately (as is often the case with things from my childhood) I remember the Peanuts specials being a lot more entertaining than they actually are.  Dull, Dull, Dull, but with a twist of holiday charm.  I can personally attest that right now listening to this album I'd like to take a nap.  It reminds me of Bob Ross, the painter, who's voice never ceases to lull me to sleep.  The Peanuts cartoons have the same kind of energy. 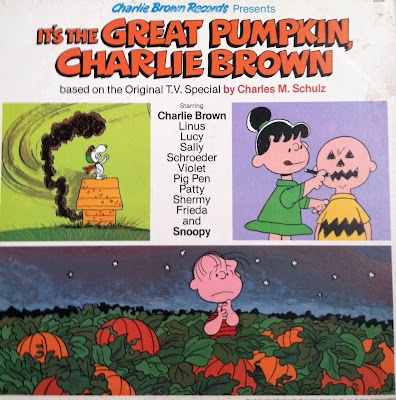 Though I am always happy to hear the Vince Guaraldi (one of my all time favorite jazz artists) score backing up these boring ass kids.  Even though attention spans have lessened over the years this is still a classic, so Happy Halloween my fellow whores of vinyl.
Posted by Vinyl Whores at 4:48 PM 0 comments 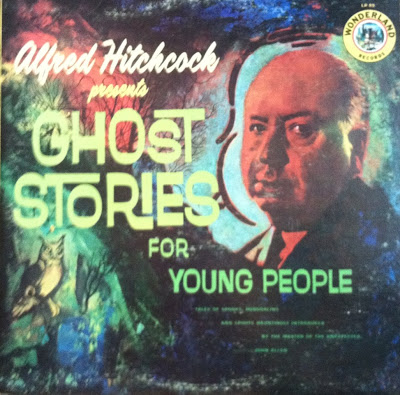 Happy Halloween my fellow whores of vinyl.  Today Dan and I are hunkered down in the house.  Both with colds, just lounging about watching old horror movies.  Right now we are watching Karen Black, Bette Davis and Burgess Meredith in Burnt Offerings.  So why not do a quick blog while we watch.  Here is a great kids album Ghost Stories presented by Alfred Hitchcock! 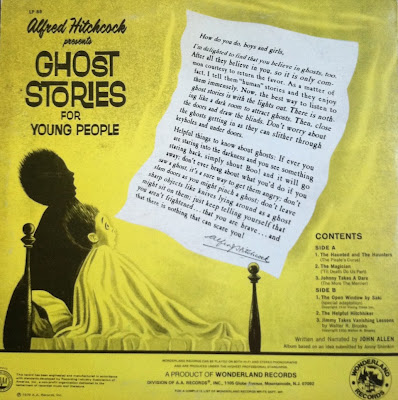 It's pretty straight forward.  Old Hitch does the intro complete with his theme music, and trademark tongue and cheek dry delivery. 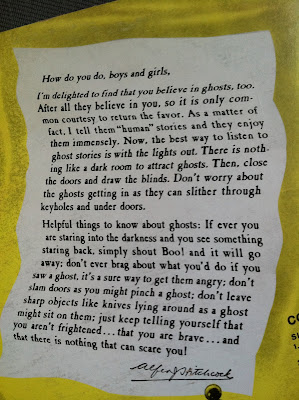 The stories are (as you would expect from a kids album) tepid at best but with that Hitchcock feel. 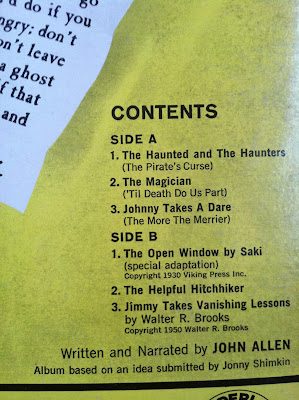 Here it is all in one track for your listening pleasure.

A Very Vinyl Whores Halloween: The Legend of Sleepy Hollow 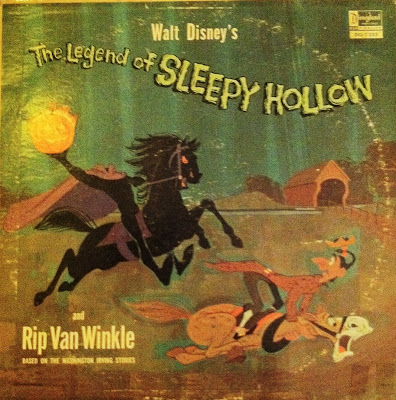 It's not really Halloween until I have watched Disney's Legend of Sleepy Hollow (and of course Friday the 13th Part 2.)  But for today I'll just be talking about Sleepy Hollow.  I had an abridged version of Disney's Sleepy Hollow from a Jonathon Winters Halloween Disney Channel Special.  But it had all the important parts and I can still recite the whole damn thing verbatim.  It's my favorite kind of Disney, corny Disney!  Disney from another time with Bing Crosby and the Andrews Sisters doing the vocals and i won't lie I simply can't get enough.  I love it, and it makes me want to live in that cartoon!

Leave it to the good people at youtube to have the whole special posted (I stand corrected it was a Wonderful World of Disney not a Disney Channel Special.)  The record is your standard Disney Story book, but you gotta love that art.  And the people at Disney have slightly reworked the songs on the LP, perhaps to make them more listener friendly, but probably to avoid paying some kind of royalty.  I'm sure Bing beat the crap out his kids over that one.  Hear is both side one (Sleepy Hollow) and side two (Rip Van Winkle and other stories) in one 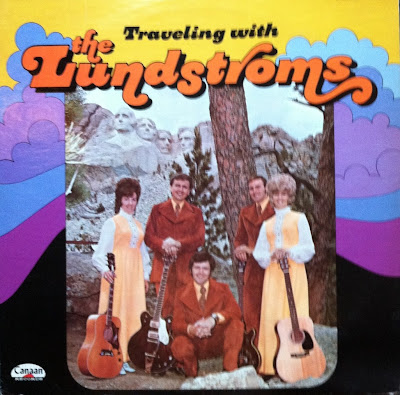 I love religious folk/country groups who wear matching jumpers and brown corduroy suits.  Such a dynamic look for such a cruddy sound.  It's exactly what you'd expect from people who look like that.  Honestly if you want this kind of folky crap (which on occasion i like to throw on a playlist) check out The Springfield's at least there you'll get the benefit of Dusty's lead vocals.

As often is the case when I find an album like this with the most effed up album art and then go hunting on the internet for more information the artist in question (9 times out of 10) turns out to be rather famous.  That is the case here but I simply don't care enough to be bothered.  The point of this album is clearly the cover art.  Anyone will to trek out into the wild in polyester pants suits deserves a place in our growing collection of weird shit.
Posted by Vinyl Whores at 7:02 PM 0 comments 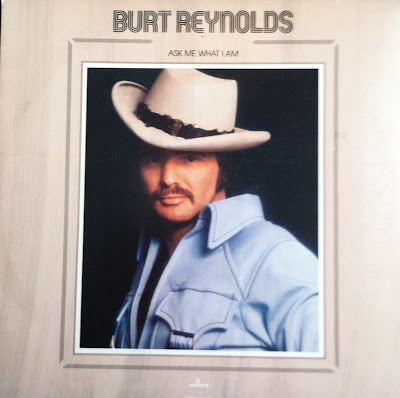 Being a connoisseur of pop culture also means I am a connoisseur of all things celebrity.  Especially celebrity vinyl.  But even in the world of celebrity vinyl there are few things weirder or grosser than Burt Reynolds self titled album...Burt Reynolds. A champion of men, an actor's actor, and the only person I know who has definitely been in Loni Anderson, Burt exemplifies just what I love most about celebrity vinyl.  An album where people were clearly trying to capitalize off his fame by pumping out a shitty record to sell to the throngs of ladies who can't get enough hairy, burly, Burt Reynolds in their lives!

I know the big question on your mind is as such; What kind of music does old slugstache sing on his debut LP? Well as you can hear from the track above (Childhood 1949) it's a mix of Peter, Paul and Mary, the soundtrack to The Last Unicorn, and a touch of country, with a whole lot of shit thrown in. A lot of it is "spoke sung" which worked for Rex Harrison in My Fair Lady, but on an music album it just makes Burt sound ...talentless.

But Burty Poo was far from talentless, just check out this cut song from Best Little Whorehouse in Texas called...wait for it...Where The Stallions Run. So cut Burt some slack, he's a damn icon. And one thing every icon needs under their belt is an album. So check that off your bucket list Burt.

I will leave you with this last spoke sung bit of brilliance. Thanks Burt...thanks.
Posted by Vinyl Whores at 9:24 PM 0 comments