Thanksgiving was a raging success thanks to our Chef's Dan, Anne, Tirtzah (NAILED IT), and Elizabeth (Vintage Spinster).  Me and Trevor and Tim hung back and did what people who can't cook do...we got drunk.  Each chef came prepared, having prepped their foods ahead of time so there was plenty of time for all the traditional Thanksgiving activities.  The parade, the dog show, the pot cookies, the booze and now a new tradition has emerged.  The Thanksgiving Sleeveface.  I have been pulling possible sleeveface albums for a couple weeks, but everybody dove in and found what they wanted.  I think the work speaks for itself.


Tomorrow will be Part 2 Barbra Streisand Thanksgiving Sleeveface.  Followed by Part 3 the Making of Sleeveface: It Takes and Army.
Posted by Vinyl Whores at 1:00 PM 0 comments

Email ThisBlogThis!Share to TwitterShare to FacebookShare to Pinterest
Labels: Sleeveface

Records Laying Around the House

These are the LP's we have out and about this week.  Always and eclectic selection.  Just thought it'd be fun to share what we are listening to this week. 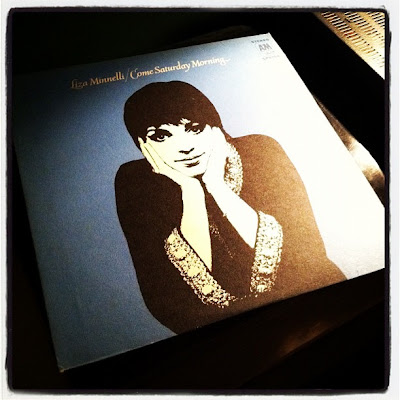 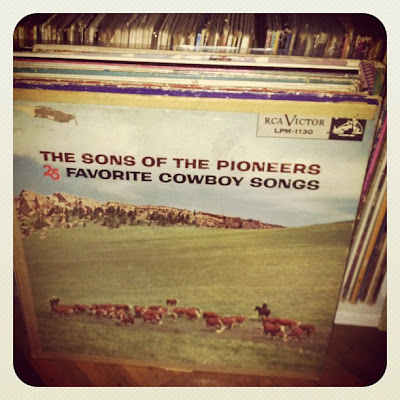 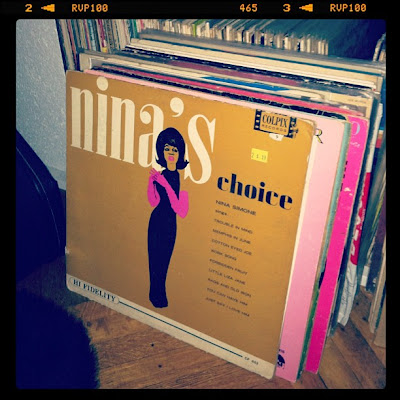 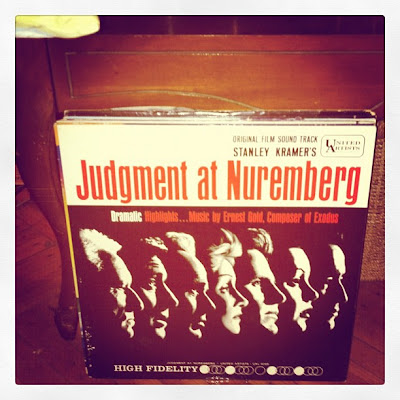 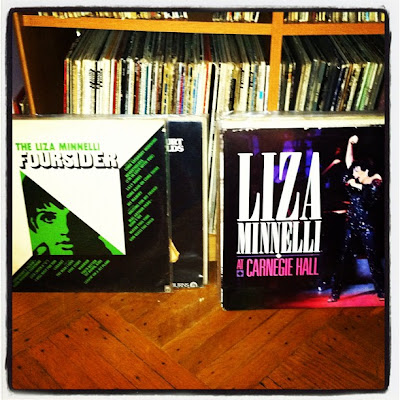 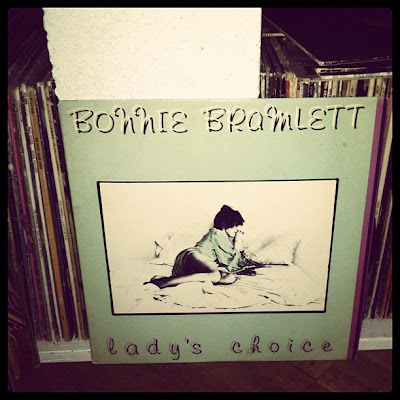 Email ThisBlogThis!Share to TwitterShare to FacebookShare to Pinterest
Labels: Records Lying About the House

Buddy Greco is Gonna shoot you in the head 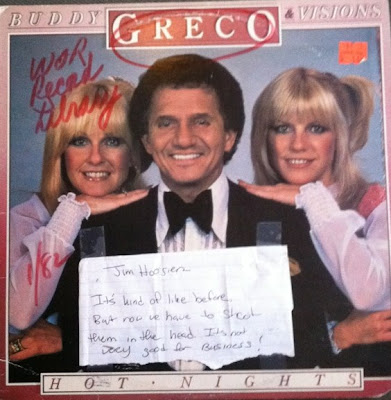 As if it weren't terrifying enough to be sandwiched by the Suzanne Sommers twins this comes with note threatening to end your very life...or someone's life.  It comes in the form of a note taped to the front which reads: "Jim Hoiser It's kind of like before but now we have to shoot them in the head.  It's not very good for business."   You know what else isn't good for business??  This album cover. 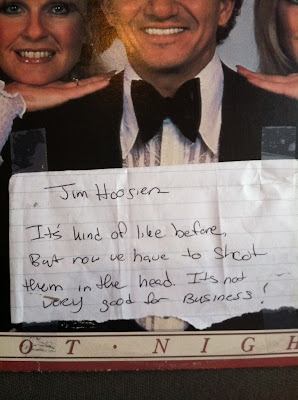 Email ThisBlogThis!Share to TwitterShare to FacebookShare to Pinterest
Labels: Effed Up Album Art 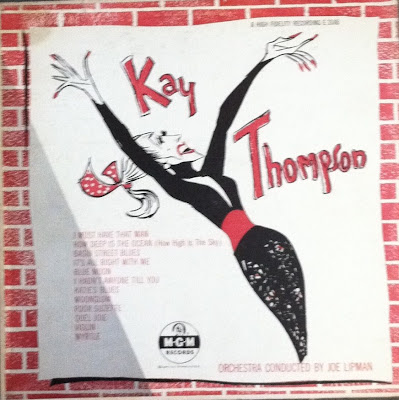 Ever loving Kay Thompson, the woman who taught Judy Garland how to sing.  The woman who brought us Eloise, and stole the spot light from Fred Astaire in Funny Face.  A woman who ate only baby food and fig newton's and got methamphetamine's shot into her vocal chords on a weekly basis.  A woman who was a Christian Scientist but had 20 some odd plastic surgeries over the course of her life   A woman who rapped long before LL Cool J and Lil' Kim and made it posh for ladies to wear pants.  She founded the rat pack and was Liza's godmother.  Fashion Icon, style maven, egotistical, and hilarious, talented beyond measure, and always ahead of the times Kay Thompson was in short the...real thing.

You would think a woman who was that talented would have been the biggest star on earth but Thompson had a bizarre notion that she only wanted to be known in certain circles, the best circles, she didn't really care if middle America knew who she was or not.  The respect of her peers was more important to her than fame... or maybe she just wasn't good with rejection?  Either way her musical talent alone was ground breaking. She was the creator of so many musical styles that have become standard to the ear, but in fact came straight from Thompson.  Kay's signature song I Love a Violin (written by her) here performed on The Milton Berle Show is a personal favorite.   It starts with It's Alright With Me and goes into Violins.
There's not a ton of footage available of Kay performing so I will just include the other version of Violin (With her famous Hello, Hello intro from her club act) because one thing I am learning is you can never have too much Kay Thompson in your life.

Kay started in radio (which is definitely the most boring chunk of her biography) a perfect place for a homely broad with a great voice and winning personality.
In the early days of radio and film Kay always had a vocal choral (a lady never goes anywhere without her chorus of singers.)  Kay worked for pretty much everyone in radio, and in turn pretty much everyone from radio moved west and got into the movie business.  The transition was obvious, and she fit right into the MGM machine.  Rubbing elbows with the biggest stars in Hollywood and making friends with the likes of Judy Garland, Lena Horne, Frank Sinatra and pretty much everyone else who came across her path (though she did have some great feuds with stars like Mary Martin and Vivian Vance).

This is a number from The Ziegfeld Follies of 1946 that Kay wrote for Greer Garson mocking her status as a serious actress and giving her the opportunity to make fun of herself.  Fortunately Garson was a stick in the mud with no sense of humor and turned it down.  The next obvious choice was Judy Garland (though the MGM big wigs did not want Judy portraying such an adult part as they had spent so much time painting her as a child.)

(Here is Thompson performing Cremetante on the Ann Miller Show)

The number was called A Great Lady Gives an Interview or Madame Cremetante where an Academy Award winning actress is interviewed by a a gaggle of men from the press.  She tells them of her next picture about the woman who invented the safety pin.  Its a quintessentially Kay Thompson number if you skip to the 7:09 mark you will see how seamlessly the boys go from applauding her to starting the rhythm section of "the Cremetante Rap".  I am obsessed, OBSESSED!! with the Kay Thompson rap.  Something she incorporated into many of her original songs.

(Poor Suzette)
Skipping ahead in the life of Kay Thompson to her years as a night club performer we have another example of how she masterfully she wrote a story song (again about a grand lady.)  Again the number begins with a spoken word section that builds into a rap that explodes into a razz-matazz jazzy song.  It's so very, very Kay.  When she performed this in her club act she would insert celebrity guests into the roles of Poor Suzette's lovers which drove the crowd wild with delight!

My favorite Kay Thompson spoken word/rap/story song is another number from her club act called Myrtle of Sheepshead Bay.  Its is sheer perfection and I wish more than anything there was a video of Kay performing this number.  As a Kay Thompson super fan my boyfriend Dan (also a super fan) and our dear friend Anne (another of Kay's super fan's) put together a version of Myrtle as we think Kay would have performed it with  The Williams Brothers.  This is at my monthly show TOO UGLY FOR TV and other than the awful fucking hipster who didn't have the common sense to get out of our way I think the number was flawless!!

Everyone who was anyone came and saw Thompson and the Williams Brother many came multiple times, or in some cases every single night. She revolutionized the club act and her style became know as the "Kay Thompson Style." Stephen Sondheim used the "Kay Thompson Style" in Anyone Can Whistle for the character of the evil Mayoress Cora Hoova Hoopa played by Angela Lansbury (who was a dear friend of Kay Thompson.)  The above song is a masterpiece, and almost sounds as if Kay wrote it.

(How Deep is the Ocean)
Kay had a long and strange career that started in radio, she had a brief stint on Broadway (before she was fired by Vincent Minnelli and replace by Vivian Vance in Hooray for What?) but the thing Kay might be most famous for are the Eloise books about a precocious little girl who lives at the Plaza Hotel.  The books were such a hit Kay was offered a free suite at said hotel, and basically treated the place as her home.  In fact she felt so at home she would use the swank Persian Room as her own personal rehearsal space...who wouldn't.  This is another of my favorite Thompson numbers call 3A.M. in the Persian Room.  A brilliant diddy about what happens after hours in the infamous Night Club.  Look at Kay's outfit.  A Fur coat, and a stylish hooded jumper....remind you of anyone?  Of course Thompson came first. 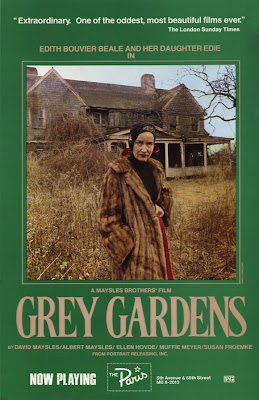 Here is Kay and the Williams Brothers in the Persian Room

Kay was a gal who was always light years ahead of her contemporaries when it came to....well...everything.  When she first appeared on the radio scene her arrangements were considered revolutionary.  They were jazzy unlike anything anyone had ever heard, so much so that columnist Walter Winchell frequently devoted time on his radio show and in the papers berating Kay for ruining classic arrangements.  Of course 20 years down the road when Kay was changing the face of the Night Club show blowing them away night after night with her brilliant original material and her own personal style, Winchell changed his tune.  Time had made even Winchell a fan of the Thompson brilliance. 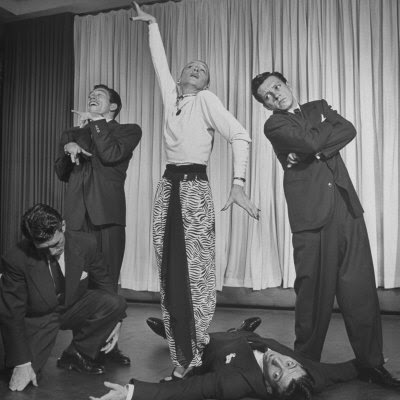 There is way too much information in Kay's biography to transfer to my blog but if she interests you at all I can't recommend her the book enough.  Thompson lived a charmed life (not without it's ups and downs) but she did it all on her terms and she never lost her spark and her lust for all things lovely and strange. 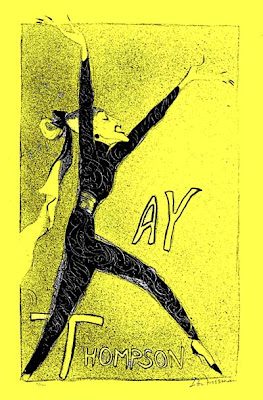 Kay was stubborn, and strange, selfish, and giving.  It pains me deep in my soul to read Sam Irving's brilliant biography and know the hundred's of film and Broadway opportunities Thompson had in her life.  Most of which she initially said yes too.

But like a cat toying with a mouse, kay never had any real intention of loaning her talent to any of them.  She was a career maker, and star maker (if she loved you) but seemed to always skirt the spotlight herself, though she wanted nothing more than fame and fortune.  It was Kay's joke on the world to hold her talent just where we could see it and then yank it away.  I love this quote from Sam Irving's brilliant book "Whenever I'm tired I just think about the glorious colors of butterfly wings.  It's refreshing, I mean, butterflies never get tired-or if they do, we never have to hear about it." - Kay Thompson 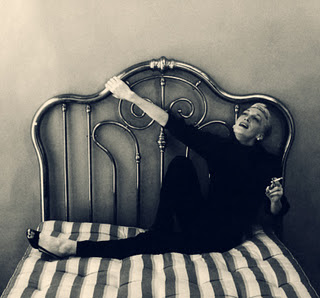 I have a friend named Tanner Effinger who used to live in NYC.  Many moons ago he moved to the non-city of Los Angeles, but before he left he introduced a small group of his nearest and dearest friends to one another, knowing that these were folks of a similar ilk.  Turns out Tanner's attempt at playing matchmaker was spot on for we have all become great friends.  Anne, Dan, Me (Garth), Tirtzah, and Josh (the motley crew who brought you Hurricane Sleeveface).  Recently Tanner was back in NYC on a stop over as he moved to London.  It was over Halloween so I met Tirtzah and Tanner at her place and we were gonna go costume shopping.  While I was there I decided to finally do something I'd been meaning to do for years.  And that is photograph their amazing Wall of Vinyl. 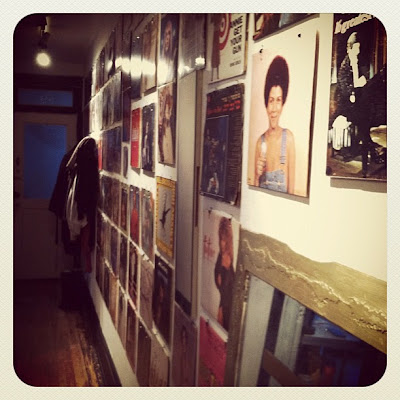 When you first walk into their place you are faced with a long ass hall which they have adorned top to bottom with my favorite thing in the world...VINYL!  It is such an amazing site.  Their taste is exquisite to begin with just check out this bitch ass bubble chair. 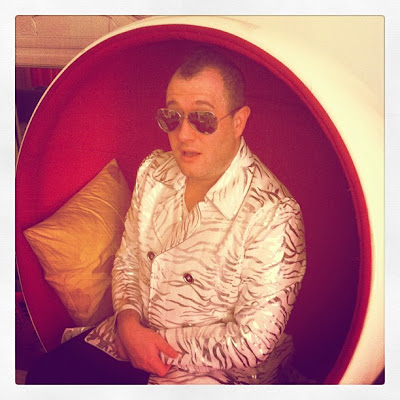 And their taste in Vinyl is delicious and eclectic.  Cause of how long and narrow the hall is, it's hard to get a real good shot, below is from the kitchen. 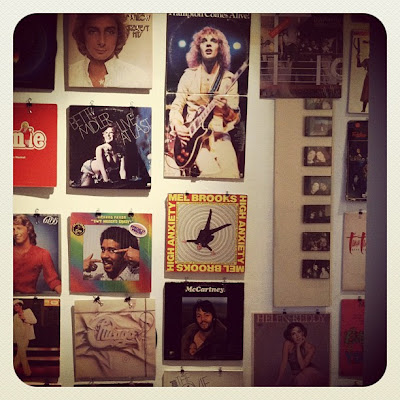 From classic rock to classic showtunes, Helen Reddy to Peter Frampton they are all there.  No genre is left out. 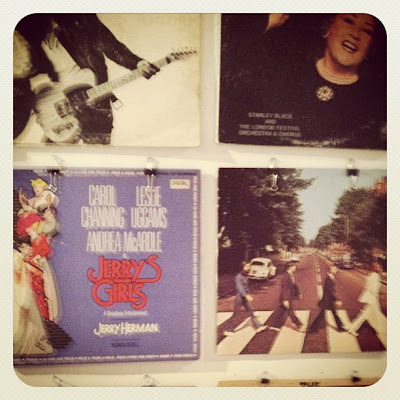 Only at Tirtzah and Josh's house would Ethel Merman be chilling next to Bruce Springsteen. 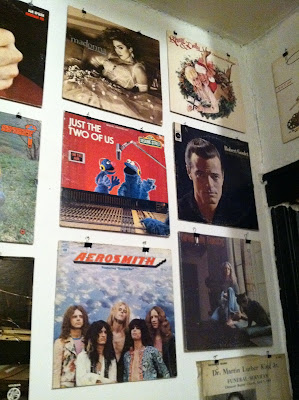 And where else would Robert Goulet, Aerosmith, Carole King, and Sesame Street live in such peace and harmony. 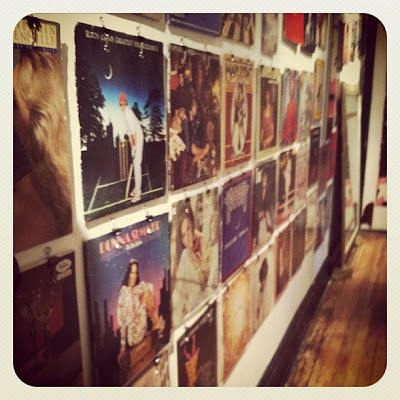